Impule is a First Person Sport game developed in 3 months by a team of 6 Master1 students at the ENJMIN. It was made with Unreal Engine 4 and I worked as Game Designer and 3D/VFX Artist.

My main tasks on the project were :

Encouraging teamplay
We built the arena in such a way that players must play as a communicating and organized team as placement is very important.
There was a lot of tweaking to do on players’ and ball’s speeds. As it’s a sport game, we wanted emphasize on teamplay. One of the idea we followed was to motivate players to pass the ball. Carrying the ball makes the carrier move slower so that he can hardly score alone.

Designing the Arena
The level design of the Arena had to stay as simple as possible so that players can understand what’s happening and where are the other players.
The circular shape of the playground added to the fact that goals are moving were hard enough.

Creating assets
After defining the art direction, my main input on the visual aspect of the game was with VFX. Using UE4 Cascad particle system editor and the material editor allowed me to improve the look and feel of the game. I created some force field shaders for the ball and the arena dome.
I worked on the creation of the ball and goals with 3DSMax. 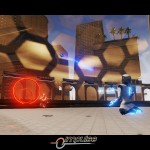 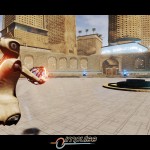