Old Wheels is a race/destruction derby multiplayer game using a real wheelchair as game controller. It was developed in 3 months on Unity by a team of 4 Master1 students at the ENJMIN.

In Old Wheels, players embody 4 old persons escaping their retirement house. Their escape plan is simple : knocking over everything on their way – chairs, tables, and even nurses – in order to create enough distraction to rush to the main portal. 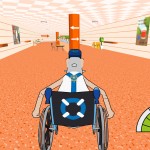 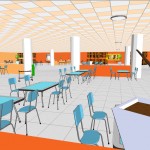 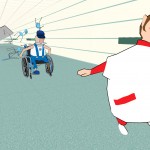 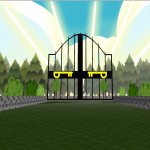 My main tasks on the project as single programmer were :

Creating a multiplayer game
The game had to run on different computers as one computer could be linked to one wheelchair at the same time. I had to deal with latency and players position synchronisation. Moreover, the core gameplay was based on physics simulation (players had to rush into objects) so I had to cope with the physic behaviors considering the client-server architecture.

Connecting wheelchairs to computers as game controllers
The other big challenge of the project was to connect a custom input device to the game. Thanks to the Arduino technology, I was able to get the wheels rotation and use these values as players’ gameplay inputs (details on the complete setup below).

Prototyping fast and efficiently
With only 3 months to create this ambitious project, I had to allow game designers to test the core gameplay and level design before network and wheelchairs were available. It implied communicating a lot with the team to avoid loosing time as much as possible and keep some place for iterating.

This game needed to work with a client-server network architecture as each of the 4 wheelchairs is working like a game arcade box, running on separate computers. 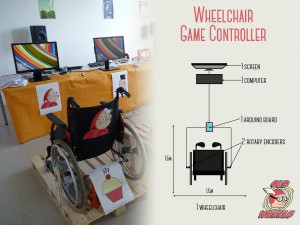 The game uses a real wheelchair as controller. Each wheelchair is connected to a specific computer receiving the wheels inputs. The wheelchairs are placed on wood pallets with holes under the wheels. Wheels can freely rotate without ground friction, meaning that the wheelchair is not moving.

Our gamecontroller was used for a 4 players « race » game, but it could be working on very different projects with only one wheelchair.
For example, we’ve been thinking about Therapeutic Games for disabled people, or disability awareness campaings. The controller works with Unity so the possibilities are numerous and making new games with the controller is possible.

I got the real wheels rotation using rotary encoders coupled with an Arduino board for each wheelchair. 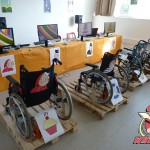 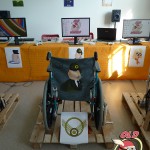 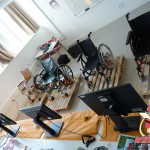