In 2014, I started 4Edges games, an indie game studio with 3 friends. We worked on several projects including the recently greenlighted Lavapools (I only gave a few design ideas and feedbacks on this one) and The Blob Minute (not released yet).

The Blob Minute is a 2D Platformer where you only get one minute to complete a level version. The Blobs army is invading a spaceship, the player has to reactivate the shield power to keep the vessel safe. I developed this project with Unity, working as Programmer (C#), Game & Level Designer and Graphic Artist.

My main tasks on this project were :

Gameplay programming
I’ve been working on all the gameplay features integration such as levers mechanism, ennemies with basic AI (FSM). I worked on a detailed character’s physics : as the game takes place in a spaceship, we wanted the gravity to be original, including a « gravity jump » feature.

Tools programming
During this development, I created a XML editor to create and edit XML files directly inside the editor. It was coupled with my game save system and allowed me to define the scoring values of each levels in a dedicated file, while player’s data are stored in a second one.
I also developped a feature for the levers and doors system. The relation between levers and doors is shown in game by a kind of « light path » so that players can guess which lever is connected to which door. As levels are different, I needed a way to create dynamic light. This was done creating dynamic lines between points whose color is changing when levers are triggered.
The game was using a tileset system importing XML generated tile maps in Unity. It helped to create a wide number of levels.

Game and Level design
Each level is composed of 5 versions of itself (with the same architecture), where ennemies and dangers are placed differently, with a growing difficulty. The idea is to surprise the player as the things he saw in the previous version may not be exactly the same in the following rush. We tried to make the player’s learnings and habits an unrealiable thing. The time constraint forces the player to rush and implicitly use his memory to anticipate the level. 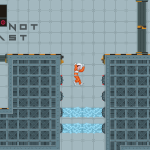 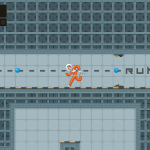 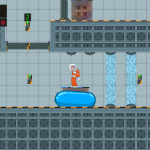